Cheryl Cole and the liquidity paradox

February 25, 2010
This may be the first time I've linked to a story in The Sun, but it illustrates a striking economic puzzle, so here goes:


"[Cheryl Cole] will not be fighting for a huge settlement. She just wants to get out fast so she can press on with life and move on.

"The initial advice is that it speeds up the process if there is no claim for money"...Cheryl hopes to keep the couple's £6million home.

So wait...this transaction will be more liquid with lower transaction costs if it takes place in property instead of cash?

This goes against all standard microeconomic theory, which strongly implies that cash transactions should be more efficient than barter. Cash is a fungible asset, highly granular, and any transaction involving other assets will be an imperfect match for the agent's preferences, reducing the available consumer surplus.

What could be the explanation for this?


Whatever the right answer (and it's probably a combination), this apparent paradox of liquidity illuminates some interesting features of real markets which rarely find their way into the microeconomics discipline.

[article continues below this slightly disturbing yet appealing picture]

The article goes on to criticise Ashley:


"as more shabby revelations emerged about his links with five girls."

which is all very well, but a bit rich given that Cheryl has her own widely reported "links with five girls" (see the link for photographic evidence). 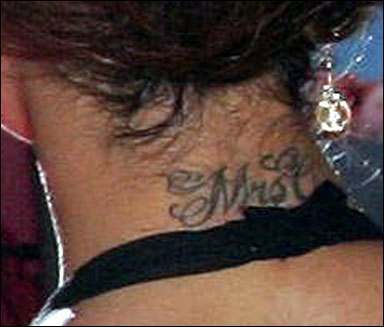 Finally it appears that Cheryl, who plans to revert to her maiden name, Tweedy:


may return to America to have the "Mrs C" tattoo on the back of her neck removed.

Note, however, her foresight in having included just Ashley's initial in the tattoo. This opens up the opportunity for her to reduce pain and trouble by hooking up with another partner whose last name also begins with C. Not that I'm suggesting anyone in particular - just saying...
Ashley Cole Cheryl Cole Cheryl Tweedy cognitive bias divorce economics endowment effect liquidity The Sun uncertainty over preferences

Rigour? In a blog?

January 11, 2009
Brad DeLong has an impressively clear (although, or perhaps because, a bit technical) piece on risk appetite and fundamental values of assets . I feel I should respond to it, but it's such a tour de force of clear and explicit assumptions, rigorous logic and thunderous conclusions that I feel I barely can. I particularly loved this statement for pure bloody-minded literalism (that's a good thing, by the way): The fundamental values of asset prices are the money-metric values that the costate variables associated with the commodities would have in some reasonable utilitarian central-planning social-welfare-maximization exercise under reasonable utilitarian preferences. However, here is what comes to mind: Given that asset prices rarely approach the values Brad ascribes to them, could this be because there is competition for the limited amount of savings capital available in the world? If I, as a productively investing business, want to get access to some of it, I probably need
Read more